Little League, Big Dreams
Few experiences I’ve had in sports - from playing on great and awful teams as a kid to witnessing Super Bowls and Final Fours as an adult - measure up to the intensity of the championship game I coached, and lost, in the Roland Park Baseball League this week. And as in business and life, you often learn more from the mistakes and the tough losses than the wins, so I thought I’d share.
Allow me to set the stage. I coach my 10-year-old son’s team in the American League of RPBL, which is for kids who are mostly 11 and 12 (some are still 10 and some turn 13 during the season). This is in an interesting age group because you have kids who have already hit their growth spurt and look like man children; and those (like my son) who are still on their way up. As a result, you witness comical confrontations like a four-foot-seven, 75-pound pitcher facing a five-foot-eight, 165-pounder hitter. Often enough, the little guy wins. 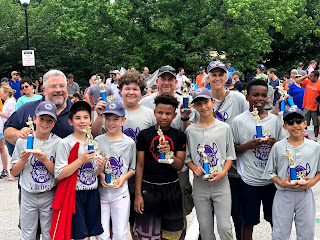 This season our Vikings were the little guys, mostly younger kids for this group. But we had talent and solid pitching, and enjoyed a winning season, finishing 8-5-1 and in fourth place in a 12-team league. We went on a run in the playoffs, winning two games and advancing to the championship game against the Falcons, a team largely composed of older, bigger kids. They were 13-2 overall and the No. 1 seed.
It was an epic Little League game, with parents and family and friends lining the newly built and beautiful Roland Park Baseball home field in Mt. Washington. If you haven’t seen it, this field is right out of a Norman Rockwell painting; it’s perfect, tucked away in a wooded lot with with an outfield fence in right, towering yellow foul poles, dugouts, and even an old school scoreboard.
The night of the game, I saw, for the first time, the charity brick I had purchased to honor my late grandfather. It read, “In Memory of Daniel Abel, Baseball Fan.”
I got a little chill when I saw it - my grandfather was our family’s first baseball fan. He must have listened to thousands of Orioles games on a transistor radio. He took his kids - my dad and his brother - to the welcome parade when the Orioles came to Baltimore in 1954. When my father showed up to see his grandson’s game that night, I showed the brick to him. He didn’t know I had purchased it. And, wearing his City College reunion baseball cap, he just nodded in appreciation and said thanks. I felt good.
And then it was time to play the game. Our boys played hard and well, and thanks to some great defensive plays and opportunistic hits (and walks) we took a 4-2 lead ino the bottom of the the sixth, the last inning. But as fate would have it, that’s when the Falcons’ bats came alive. With one out in the bottom of the inning, the Falcons had tied the score, 4-4 and had runners on second and third, with first base open.
I convened with my assistant coaches and we agreed to intentionally walk the next batter to load the bases and create a force out at home. Now this is a good, no-brainer move in a Major League game, where the level of play and nuance of the game is understood by all to be at the highest level. But in Little League… let’s just say that’s the first intentional walk I’ve called for in 8 years as a youth baseball coach. I felt a little like Buck Showalter and a little like a guy who just took away a shot at glory for the kid who was about to hit. There’s also the knowledge that the kids and parents are watching how I’m handling this situation and myself and I needed to show appropriate composure and sportsmanship, even though I’m grinding away inside.
But that’s sports and that’s life. You have to make decisions and live with the outcomes.
Back to the game. With runners on every base and the season on the line, our pitcher Max found his fastball and location and struck out the next batter. The crowd erupted. Maybe we’d get out of this. The next batter came up and he did it again with three fastballs that were nearly impossible to hit. On to extra innings!
The intensity grew as both teams had to rely on pitchers who weren’t nearly as experienced as the ones who preceded them. In the bottom of the 8th, with daylight dwindling, and the fans and kids nearly bursting from anticipation and tension, the Falcons loaded the bases and pushed a run across on a soft ground ball that eluded our pitcher and first baseman. Their team piled on one another in joyous celebration. Our kids and fans could only watch.
Some of our players shed a tear or two but we all felt so proud. We had over-achieved and played well. But it definitely hurt. We were right there and came up just a tiny bit short. After the game and the handshakes with our worthy opponents, I gathered the kids to congratulate them on a game and season well played.
We stood, our little circle of kids and coaches, just a few feet from the third base line, with dozens of parents and friends behind us. I felt so proud but also a deep sense of disappointment for them as they looked up at me. Those faces. So earnest and young. Some with tears, some who were already over it. Some who probably didn’t know how to feel and were waiting to take their cue from me.
Honestly, at first I didn’t know what to say. After most games, we’d recap what we did well and what we needed to work on. But now the season was over and there was nothing left to work on, it was over.
I scanned the kids for a moment waiting for the right words. I felt the emotion rushing in me.
“I love you guys,” I said. Then we went out for pizza and ice cream.
Posted by Greg Abel at 9:33 AM